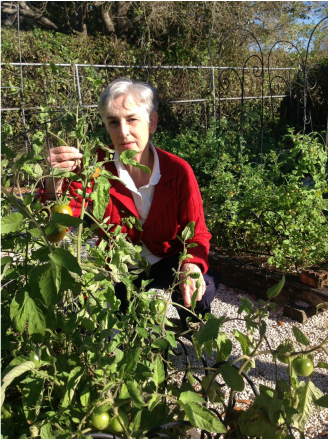 My objective in writing this blog is to keep track of my ideas as they relate to gardening in an unfamiliar climatic zone.

On August 1, 2014 I retired from nearly a quarter century of working at a public community college in Miami, Florida.  Instead of staying in town and tending my garden and enjoying the companionship of lifetime friends, I decided to move closer to my daughter and her family of three children under the ages of six.  Sure, I could have waited an additional 10 years to make my move, but by then the children would be 10 years older, and they wouldn't take so kindly to an old lady moving into their teenage turfs.  It was: do it now, or don't do it.   My daughter's family lives in Philadelphia, and that was a huge change of latitude and climate for a warm-blooded gardening grandmother from Miami.

I thought long and hard about my needs in order to make this move a satisfying one.  I recognize that it is probably my last move undertaken while still conscious and in control.  The next move will come about when I am incapable of making decisions and living independently.  I bought a house that was an 8-minute drive to my daughter's house so that I could be available for her family.  The house was on 10,000 square feet of rocky land at the top of a ridge.  I knew that I wanted to grow food...the more abundant and varied, the better.

While working with a design team from  a Philadelphia arboretum, I was surprised to learn that it is acceptable practice in Philadelphia to cut down trees that are growing in the wrong place.  In Miami, you must get permits to remove trees and make  verifiable promises to replant others in order to restore the canopy.  With that issue clarified, the placement of various gardening elements became more clear.  Because the fully grown crab apple was creating too much shade for raised vegetable beds at the end of the L-shaped property, it would have to go.  We originally talked about taking down a dogwood which was growing into the power lines (and was a temptation to my grandchildren to climb).  However, if we made a bed at its base of liriopes or some other low plant and thinned the old limbs, it could be a visual delight in the spring and a non-climbing event to young children.

The back windows of my house look out on the neighbor's back yard, and I prefer to keep my shades down to avoid the view.  I see their barbecue equipment, the coke machine, multi-colored plastic chairs, the people who come out to talk on their cell phones and have a smoke as well as their dogs who tend to their needs mostly in their yard.  To create privacy for both of us, I plan to plant a living hedge close to the property line.  The hedge will consist of hollies and cypress trees in a mix of sizes (to keep costs down and to encourage growth).  Stevens Hollies and Boulevard Cypress will be planted as soon as we determine that there are no underground cables or utilities buried where the new hedge is planned.

Planting edibles will be the focus of my new garden.  In Miami, I had mangos, papayas, pineapples, raised beds for vegetables in the winter months (our seasons are reversed).  I also raised several small flocks of hens and ducks, and I kept two hives of bees.  In Philadelphia, I plan to have rhubarb, asparagus, raspberries, grapes, mulberries, blueberries, perhaps a quince and a fig tree, in addition to garlic, leeks and other vegetable crops.  The drop from the front of the property is so steep that I shutter to think of a child running to fetch a ball and falling over the edge.  We will install a split-rail fence and grow grapes on it.  On the sides of this same rocky slope, the grass will be removed and the rock exposed.  Where we discover openings in the rock large enough to hold soil, we will plant sedums and other delicate succulents and small herbs.

At my front door is another steep drop covered in grass which I cannot imagine how to mow.  Grass is generally not a crop that I have any interest in.  I plan to have the grass removed and to replace it with a ground cover to hold the soil.

At this point, my biggest barrier is not knowing what plants can perform well in my new garden.  To amend this state of ignorance, I visit garden centers, public gardens, and take  horticulture classes at the Barnes Foundation  to help me prepare.  I am also curious about the soil, especially where the rocky slopes will be exposed.  Will any plant grow in it?  I am concerned that my gardening plans are too ambitious for my old body to be able to maintain.  Will I discover that I have bitten off more than I can chew?  Time will tell.

Follow me for more in the fall...
Powered by